IFAN is aware that some parents are surprised or concerned to see that some foods on the Milk Ladder contain sugar, and so may not be considered as a “healthy” food choice for a young child.

IFAN advises that the Milk Ladder is not aimed at all children-it is aimed only at those who have, or may be at risk of, milk allergy.  The recipes were developed by health care professionals who are aware of the role of refined sugars in childhood obesity.  However, the Milk Ladder, when followed appropriately, moves milk allergic children off the bottom steps within 1 – 2 months, so there are unlikely to be long term physical consequences and sugar intake can be modified elsewhere during this critical phase of what is a medically indicated diet.

Having used the Milk Ladder or similar tools for more than 6 years, the IFAN working group has not seen an adverse effect on the weight of children who have completed it.

It is, however, possible that children who do not move off the bottom step of the Milk Ladder may be offered the higher sugar foods for longer.   It is our experience that those children, for complicated reasons, hardly eat any of the foods advised anyway and some have become accustomed to other foods which are far more harmful to their long term health than milk or sugar.

The foods contained on the Milk Ladder have been chosen specifically because they contain a certain amount of milk that has been cooked (or not) for a particular length of time at a particular temperature.

Download a pdf of the Milk Ladder.  Please note that the correct milk containing recipes for home-made milk ladder foods can be found here  rather than at the lin 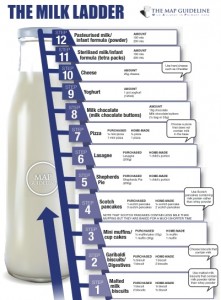 k stated in practical point 6 on page 2 of the ladder.

Guidance and instructions on its use are provided on page 2 of the pdf.

This website uses cookies to improve your experience while you navigate through the website. Out of these, the cookies that are categorized as necessary are stored on your browser as they are essential for the working of basic functionalities of the website. We also use third-party cookies that help us analyze and understand how you use this website. These cookies will be stored in your browser only with your consent. You also have the option to opt-out of these cookies. But opting out of some of these cookies may affect your browsing experience.
Necessary Always Enabled

Any cookies that may not be particularly necessary for the website to function and is used specifically to collect user personal data via analytics, ads, other embedded contents are termed as non-necessary cookies. It is mandatory to procure user consent prior to running these cookies on your website.

The information, algorithms and care pathways contained on this site represent the view of IFAN, which was arrived at after careful consideration of the extensive evidence available.

Material may be freely reproduced for educational and non-profit purposes.

In order to improve our service to you please answer this quick survey.